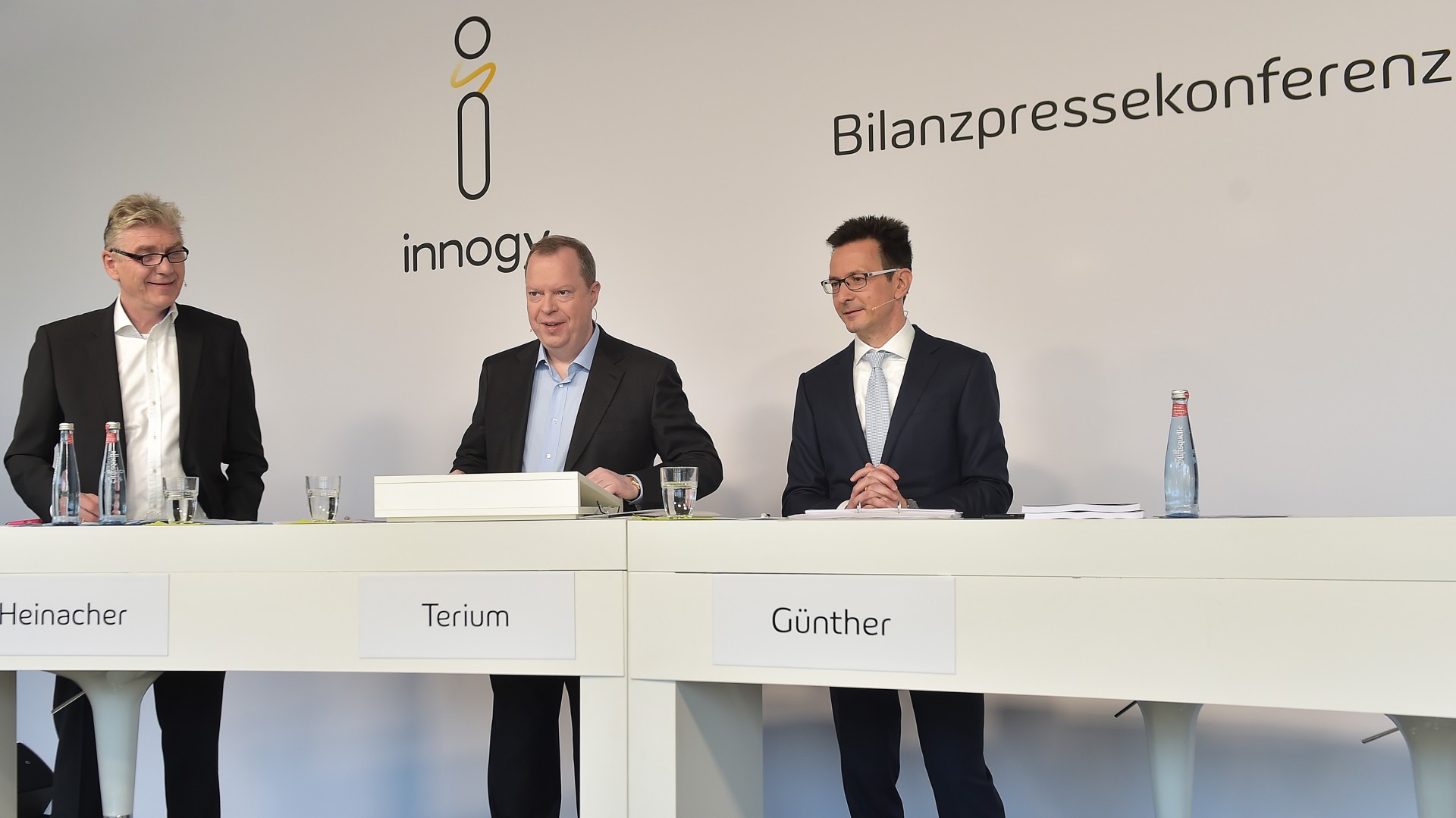 In its first fiscal year as an independent company, innogy SE achieved all its financial targets: adjusted EBITDA (previously EBITDA) totalled EUR 4.2 billion, which was within the forecast range of EUR 4.1 to 4.4 billion. Adjusted net income of EUR 1.1 billion was perfectly in line with the forecast. On this basis, the Executive Board and the Supervisory Board will propose to the Annual General Meeting in April that a dividend of EUR 1.60 be paid per share for 2016. This equates to a dividend yield of approximately 5 per cent based on the year-end closing price for 2016.

“We promised a lot for 2016, and we have kept those promises. At EUR 1.60 per share, we want to pay out about 80 per cent of our adjusted net income to our investors. We are proving that innogy is a stable stock with a strong dividend. In terms of earnings targets, we made a ‘precision landing’. Our investors can expect higher earnings for 2017. We anticipate adjusted net income of over EUR 1.2 billion.”

Terium continues: “We achieved all this while many of our resources were focused on the fastest and largest IPO that Germany has seen in recent years. That fills me with pride. I would like to thank our more than 40,000 employees for the part they played.”

As Germany’s largest energy company in terms of market capitalisation, innogy earned external revenue of around EUR 43.6 billion in fiscal 2016, which was down 4 per cent year on year. At EUR 4.2 billion, adjusted EBITDA was within the forecast range; this figure represents a decline of 7 per cent compared to 2015. Net of operating depreciation and amortisation, innogy posted adjusted EBIT (previously the operating result) of EUR 2.7 billion, thus closing 10 per cent down on the previous year. Additional costs incurred to maintain and upgrade network infrastructure were the main reason for this. In addition, wind levels were much lower year on year, which had a negative effect on the utilisation of innogy’s wind farms.

Positive outlook for 2017: adjusted net income of over EUR 1.2 billion

innogy expects a positive earnings trend for the current fiscal year, and forecasts adjusted EBITDA of about EUR 4.4 billion and adjusted EBIT of around EUR 2.9 billion for 2017.Lower costs in the Grid & Infrastructure Germany segment are a major reason for this. Adjusted net income is anticipated to total over EUR 1.2 billion, exceeding by at least 7 per cent the figure achieved in fiscal 2016. This item will additionally benefit from lower expenses recognised in the financial result. The Renewables division will probably close fiscal 2017 on a par with last year’s level, while Grid & Infrastructure is expected to close the current year clearly up on 2016. The Retail division will probably also close fiscal 2017 on a par with last year.

“The goal is a positive development of the dividend over the medium term that is in line with our earnings after adjusting to exclude special items. innogy is a strong dividend stock with growth potential.”

innogy confirms its intention to pay 70 to 80 per cent of adjusted net income as a dividend. The Executive Board and the Supervisory Board of innogy SE plan to decide in early 2018 on the exact amount of the dividend payment for fiscal 2017 which will be proposed to the Annual General Meeting in April 2018.

Business performance during 2016 in detail

The Renewables division experienced an earnings-reducing effect, caused above all by low wind levels. Compared to the previous year, at innogy’s major generation sites in Germany, the United Kingdom, the Netherlands, Spain and Poland it recorded declines, some of which were significant, especially during the second half of the year. Moreover, earnings achieved in the same period last year included extraordinary income from the sale of shares in the Galloper offshore wind project and the disposal of the network infrastructure of the Gwynt y Môr offshore wind farm. Adjusted EBITDA for this division declined by 18 per cent to EUR 671 million, similar to adjusted EBIT, which dropped by 26 per cent to EUR 359 million.

The Grid & Infrastructure division saw its adjusted EBITDA decline by 9 per cent to EUR 2,622 million compared to 2015, with adjusted EBIT dropping by 12 per cent to EUR 1,708 million. The decline in earnings in this division was mainly due to additional costs incurred to maintain and upgrade its network infrastructure in Germany. In the Grid & Infrastructure Eastern Europe segment, the result for the previous year also included exceptional income due to the first full consolidation of Slovak energy utility VSE.

Earnings in the Retail division developed positively. Adjusted EBITDA increased by 7 per cent to EUR 1,057 million, and adjusted EBIT rose by 2 per cent to EUR 844 million. This positive development is all the more pleasing given that the previous year’s earnings contained exceptional income from the revaluation of VSE. The UK retail unit made the largest contribution to the growth, although it recorded another loss based on adjusted EBITDA and adjusted EBIT. The effects of the restructuring programme initiated at the start of 2016 began to be felt: despite a difficult market environment, it succeeded in further reducing costs, the number of customer complaints was down, and the customer base remained relatively stable.

The Executive Board and the Supervisory Board of innogy SE will propose a dividend of EUR 1.60 per dividend-bearing share for fiscal 2016 to the Annual General Meeting on 24 April 2017. This corresponds to a pay-out ratio of about 80 per cent of adjusted net income, and is therefore at the upper end of the target range of 70 to 80 per cent set by innogy for the dividend payment.

Electricity generation in 2016 slightly lower than in previous year

In the fiscal year that just ended, innogy produced 10.8 billion kWh of electricity, 3 per cent less than in 2015. A large portion of this was attributable to generation from renewables: 65 per cent from onshore and offshore wind farms, 26 per cent from run-of-river power stations, and 2 per cent from biomass and photovoltaic plants. Approximately 7 per cent stemmed from conventional electricity generation capacity, which innogy states via its fully consolidated investments. Electricity production was curtailed compared to 2015, mainly on account of substantially lower wind volumes and the reduced utilisation of innogy’s wind power assets as a consequence.

Gas sales dropped by some 2 per cent to 241.3 billion kWh compared to 2015. This was due to declines in sales to distributors that increased their purchases from other energy suppliers or began buying all their electricity from them. Conversely, during the year under review, innogy sold 242.5 billion kWh of electricity to external customers, 4 per cent more than in 2015. Sales grew in the distributor segment, since innogy won new customers and intensified its supply relationships with existing ones.

At EUR 2.1 billion, innogy’s capital spending during fiscal 2016 was 3 per cent down on 2015. It spent EUR 1.8 billion on property, plant and equipment and intangible assets, 9 per cent less than in 2015. Capital spending decreased primarily in the Renewables division, dropping by 40 per cent. The completion of two large-scale projects in 2015, the offshore wind farms Nordsee Ost and Gwynt y Môr, was the main reason for this. Capital expenditure in the Grid & Infrastructure division was also slightly down, but as before, nearly two-thirds of the total capital spent on property, plant and equipment and intangible assets went to this division. Besides maintenance, the focus was on the connection of decentralised generation assets and network expansion associated with the energy transition.

Free cash flow 15 per cent up on previous year

Cash flows generated from operating activities decreased by 3 per cent to around EUR 2.7 billion compared to the same period last year. This was predominantly due to the change in working capital. Working capital is subject to significant fluctuation, especially in the Grid & Infrastructure and Retail divisions. Free cash flow increased by 15 per cent compared to the previous year, to EUR 841 million. Deducting capital expenditure on property, plant and equipment and intangible assets from cash flows from operating activities results in free cash flow.

As at 31 December 2016, innogy’s net debt totalled EUR 15.7 billion, up EUR 9.1 billion compared to the 2015 balance-sheet date. However, the net debt shown in the 2015 balance sheet is of only limited value for comparison. The capital structure envisaged for the innogy Group was established only in the course of fiscal 2016: among other things, innogy assumed financial responsibility for capital market liabilities of the RWE Group as consideration for the assets transferred from RWE to innogy during the reorganisation process. After the IPO, this financial assumption of liabilities was also initiated at an external level through a guarantor and creditor change for RWE AG senior bonds outstanding to innogy and was successfully completed in February 2017. With a total volume of EUR 11 billion, this transaction was the largest of its type by a corporate in Europe to date. Furthermore, changes in market interest rates made it necessary to increase provisions for pensions compared to the end of 2015. The EUR 2.0 billion capital increase within the scope of innogy’s IPO as well as the positive free cash flow contributed to limiting the rise in debt.

innogy manages its indebtedness via the leverage factor, which is the ratio of net debt to adjusted EBITDA. This performance indicator is more useful than the absolute level of liabilities, as it considers the company’s earnings power and, in turn, its capacity to service debt. innogy is striving for a leverage factor of around 4.0. As at 31 December 2016, it was 3.7.

As at 31 December 2016, innogy had 40,636 people on its payroll throughout the Group. Part-time positions were considered in these figures on a pro-rata basis. Last year, net personnel figures grew by 476 employees. At the company’s German sites, the headcount rose by 619 from the end of the previous year to 20,553, whereas its workforce abroad shrank by 143 to 20,083 staff members.

This document contains forward-looking statements. These statements are based on the current views, expectations, assumptions and information of the management, and are based on information currently available to the management. Forward-looking statements shall not be construed as a promise for the materialization of future results and developments and involve known and unknown risks and uncertainties. Actual results, performance or events may differ materially from those described in such statements due to, among other things, changes in the general economic and competitive environment, risks associated with capital markets, currency exchange rate fluctuations, changes in international and national laws and regulations, in particular with respect to tax laws and regulations, affecting the Company, and other factors. Neither the Company nor any of its affiliates assumes any obligations to update any forward-looking statements.