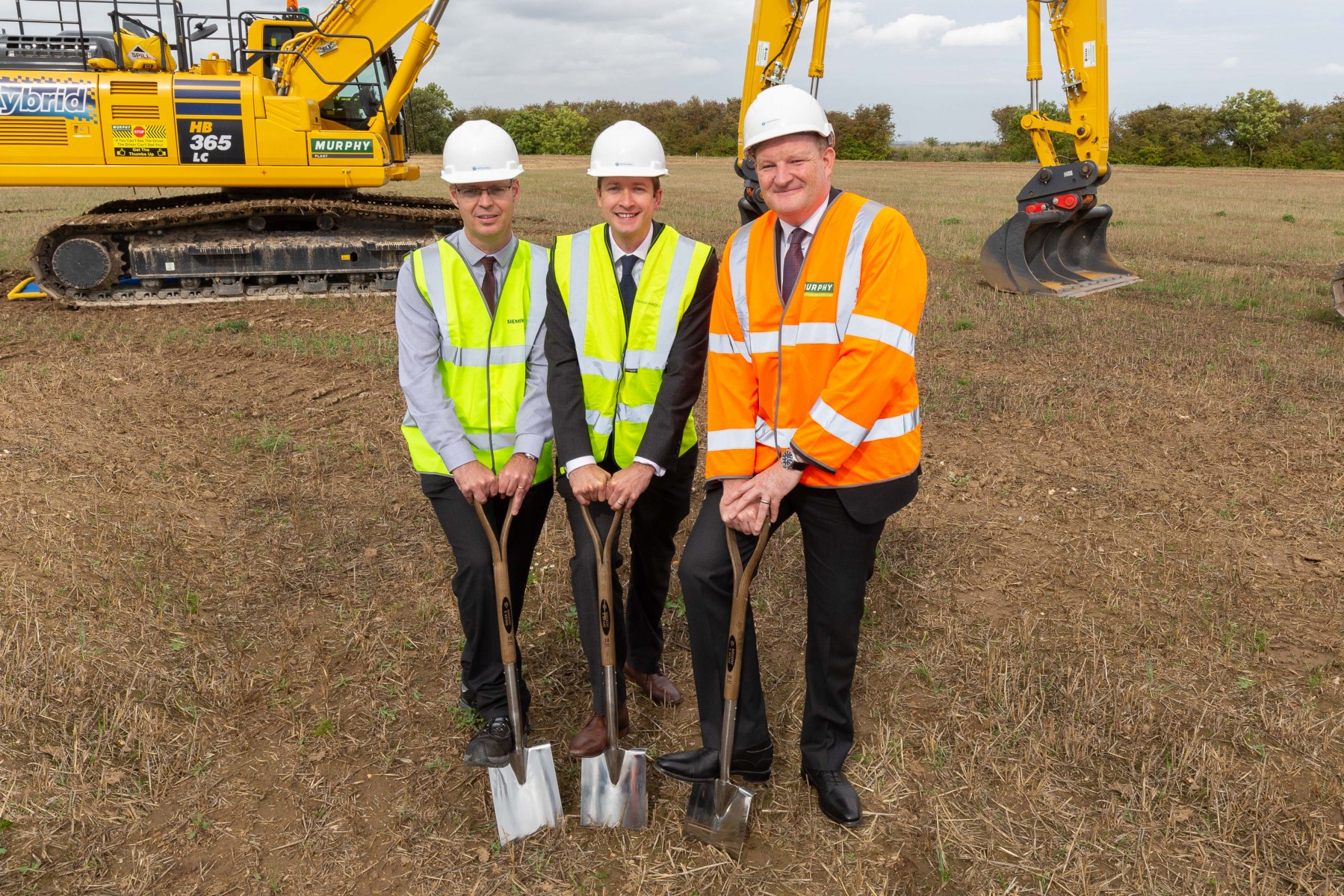 Triton Knoll onshore construction officially started in Lincolnshire today as the project commenced work on the electrical system to transport power from the windfarm to over 800,000 UK homes.

The official ‘breaking-of-ground’ took place directly on the route of the new high voltage underground export cable, and located at the main onshore cable site offices (TCC12) off the A16 near Stickney.

The two year onshore construction programme for the 860MW project is being managed by innogy, the majority equity shareholder of Triton Knoll (59%) on behalf of partners J-Power (25%) and Kansai Electric Power(16%).

UK firms J Murphy & Sons Ltd and Siemens Transmission and Distribution Ltd (STDL) have been contracted to build the project, and are already carrying out initial works including the establishment of site offices, temporary construction compounds and bell-mouths at key points along the route.

Julian said: “Triton Knoll construction is officially up and running. This moment is the culmination of years of planning, engineering, consultation, and cooperation with our supply chain and stakeholders to produce a state of the art wind farm , which benefits both local and regional economies.

“Triton Knoll is committed to supporting local and regional jobs, skills development and, through our investments, the further strengthening of the UK’s already world-beating offshore industry.

“As we continue to progress through the weeks and months ahead, we and all our contractors look forward to working even more closely with our neighbouring communities, so that local people are aware of our works and how they are progressing.”

Onshore construction presents some significant engineering challenges as Triton Knoll installs over 57km of underground electrical export cable below ground in Lincolnshire. The route starts at the landfall location north of Anderby Creek, where the onshore and offshore cables connect. It runs to a new substation being constructed near Bicker, and then to the existing National Grid Bicker Fen Substation where the electricity from the offshore wind farm will ultimately connect into the grid.

Over 300 individual directional drills – a record for a UK infrastructure project - will ensure the onshore cables can be installed without obstructing any roads, highways, rivers or drains.

Murphy’s CEO John Murphy, said: “The cable route presents an exciting engineering challenge for us and we’ve worked diligently and intelligently to create better engineered solutions that will allow us deliver it with minimum disruption. I’m thrilled to be able to break ground with Triton Knoll and Siemens and kick-start these exciting works. We’re very proud to be working on the Triton Knoll project and with their team who are so firmly committed to leaving a positive legacy in Lincolnshire, an aim we share at Murphy. ”

Work on the new onshore substation will start early in 2019, with Siemens constructing a new facility close to the existing electrical substation near Bicker. Work is already underway to construct a new bellmouth entry point and 3.8km access road to the new substation construction site to ensure that construction traffic can avoid use of smaller local roads.

Phil Manley, Project Director, Siemens Transmission and Distribution Ltd, said: “This nationally significant project will have a vital role in creating energy security for the UK. As one of the lead contractors, making sure the energy created by Triton Knoll gets to the homes and businesses which need it, we play an important role in this project. Our main offshore work will begin in 2019, with work already underway onshore to build a new access road to the substation construction site. We anticipate a number of supply chain contracts will be available for UK supply chain companies, with details to be announced in the coming months.”

Triton Knoll has committed to delivering at least 50% UK content through the construction and operation of the wind farm. At its height, the project expects to see around 3000 people working on both onshore and offshore phases of the project, with potentially up to 170 working long term in support of its Operations & Maintenance activities.

The onshore construction works present one of the most significant opportunities for local firms to benefit from the project’s investment. Both Murphy and STDL have already engaged a number of local companies in preparation for the construction start, and are continuing to seek local and regional companies to further support their work.

The formal start of construction follows a number of key recent milestones for the Triton Knoll project, including the formal launch of a £1.5million community fund, and formal announcement of Financial Close on 31 August, 2018. As part of the latest announcement, Triton Knoll also confirmed it had agreed a deal to assemble and install all 90 x 9.5 MW offshore wind turbines from Able UK’s Seaton port, while agreeing a Memorandum of Understanding for longer term operations and maintenance works out of ABP’s Grimsby Port.

For more information about the project, please visit: www.tritonknoll.co.uk.