• Operating earnings in the first quarter of 2018 as expected

The business performance of innogy SE is fully on track: the Essen-based company confirms its outlook for 2018 at Group level. It continues to expect adjusted EBIT of about EUR 2.7 billion and adjusted net income of over EUR 1.1 billion for 2018. In the first quarter of 2018, adjusted EBIT was down slightly year on year at EUR 1.2 billion, mainly due to the development of the Retail business. There was a significant increase in the result of the Renewables division; the development of the grid business was also positive. Adjusted net income was down 11 per cent, at EUR 0.6 billion. In addition to lower adjusted EBIT, this can be attributed mainly to the weaker financial result compared to the previous year. For details of business performance in the individual business divisions, please refer to the Q1 2018 statement, p. 5 et seqq., available at www.innogy.com/Q1-2018-statement.

innogy SE has focused its business on driving forward the creation of a sustainable, more decentralised and increasingly digitalised energy landscape, and is in an excellent position to do this with its three divisions, Renewables, Grid & Infrastructure and Retail. For this year and the following two years, the company plans net investments totalling around EUR 7 to 7.5 billion, i.e. investments less the proceeds from the sale of stakes; the focus here will be on the core business of the company’s three divisions. In addition, innogy is investing in the growth fields of solar, broadband and eMobility.

During the first months of 2018, innogy SE continued to consistently implement its strategy for value-added growth, and further strengthened its operational business. This includes the company’s success with the project Kaskasi in Germany’s most recent offshore wind auction, securing the rights to construct and operate the wind farm in the German North Sea with a planned installed capacity of 325 megawatts, including a 20-year guaranteed feed-in tariff under the German EEG (Renewable Energy Act). Following its successful participation in the latest UK renewables auction round with the Triton Knoll offshore wind project, innogy once again proved its competitiveness in a challenging market environment. In addition, innogy has also announced its entry into the Australian market for renewable power generation, with the acquisition of project rights for two utility-scale solar power plants with a combined capacity of more than 460 megawatts. In the area of eMobility, innogy further expanded its market position and entered into an agreement with Deutsche Post DHL Group to work together on customised, Europe-wide charging solutions in Germany and nine other European countries.

On 10 May 2018, the Executive Board and the Supervisory Board of innogy SE published their joint reasoned statement pursuant to Sec. 27 of the German Securities Acquisition and Takeover Act (Wertpapiererwerbs- und Übernahmegesetz, WpÜG) on the voluntary public takeover offer of E.ON Verwaltungs SE of 27 April 2018 (please refer to press release dated 10 May 2018, available at news.innogy.com/reasoned-statement).

Capital expenditure up approx. 43 per cent

innogy invested EUR 463 million in capital expenditure on property, plant and equipment, intangible assets and financial assets in the first quarter of 2018, an increase of about 43 per cent year on year. Less proceeds from disposals, which were on prior-year level, net investments increased by about 53 per cent to EUR 329 million. For further details, please refer to the Q1 2018 statement, p. 4.

Net debt at around EUR 17.3 billion

As at 31 March 2018, innogy’s net debt totalled around EUR 17.3 billion, up by about EUR 1.7 billion compared to 31 December 2017. The rise in net debt is primarily due to the seasonally-induced, regularly negative free cash flow in the first quarter: whereas electricity and gas sales volumes, and thus procurement costs, at the beginning of the year are above average on account of the weather conditions, customer payments are spread evenly throughout the year. Provisions for pensions also increased, mainly caused by a decrease in interest rates in Germany.

innogy slightly adjusted its reporting structure as of 1 January 2018. eMobility activities are now reported outside the Retail division in the ‘Corporate/New Businesses’ line item (formerly ‘Corporate/other’). After this re-classification, the outlook for the Retail division is now about EUR 750 million (previously about EUR 700 million). The current forecast for eMobility is around -EUR 50 million for the full year 2018.

The basis for the dividend payment is the adjusted net income, of which innogy intends to continue paying out 70 to 80 per cent. 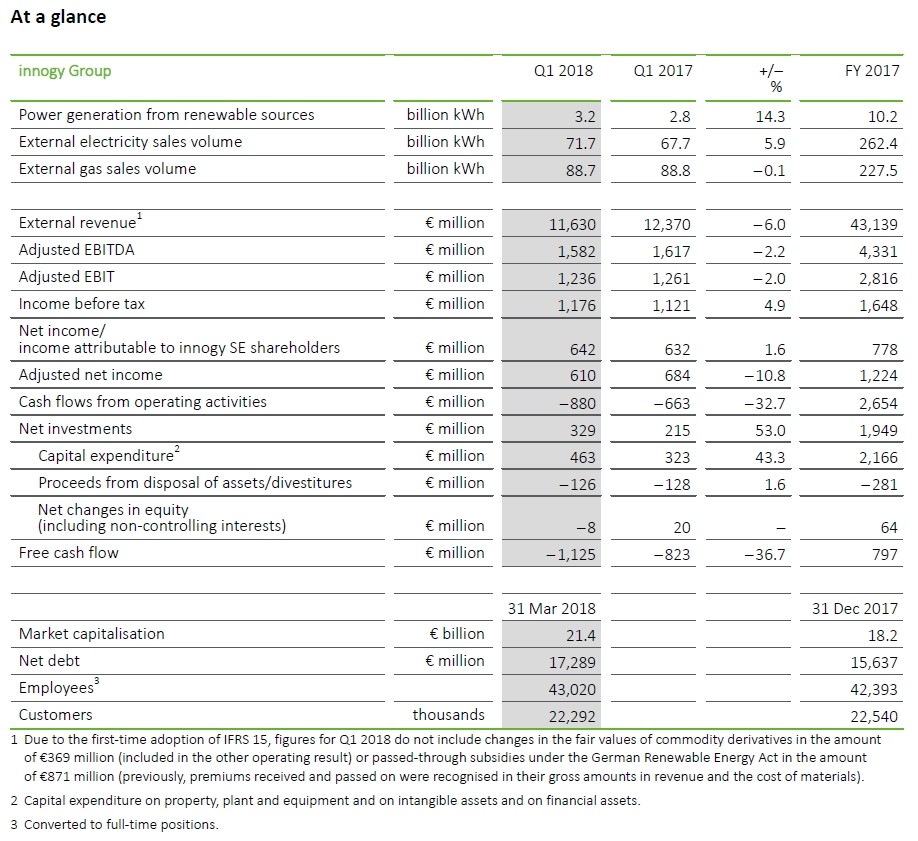