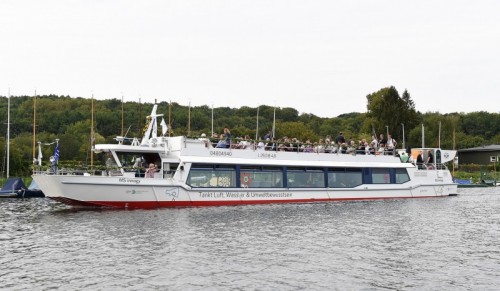 The energy revolution is picking up speed - and now on water too. In the presence of Peter Terium, CEO of innogy SE, and Thomas Kufen, Mayor of the City of Essen, MS innogy was christened in a formal ceremony on Essen’s Lake Baldeney and put into operation as a regular passenger vessel. The excursion vessel is the first ship in Germany to be powered by an environmentally friendly methanol fuel cell. The energy required for the whole operation will come exclusively from renewable sources. It will have zero impact on the climate. With the only project of its kind in the world, innogy presents the entire value chain for the first time within the scope of the ”Green Capital of Europe – Essen 2017”, from the production of the environmentally neutral fuel using renewables to its use in a fuel cell in an excursion vessel.

With MS innogy we are enabling people to experience the energy revolution directly. We obtain high-tech research from the lab and show in a very practical way what a clean energy future without oil could look like, and that includes quiet, clean propulsion systems that conserve our climate. The new MS innogy is the energy revolution that you can touch. However, it is also proof that we have the right strategy at innogy to find an alternative to oil as quickly as possible, by producing green fuels such as methanol with renewable energy and using them to drive environmentally friendly ships, aircraft and heavy goods transport.

Thomas Kufen, Mayor of the City of Essen: “It is certainly not every day that we can christen a new passenger ship on Lake Baldeney. For that reason alone it is a very special moment. If this vessel is also driven by a technology that is unique in Europe, then we can speak of an historic moment for our city. The fact that the new vessel will be used by Weiße Flotte Baldeney GmbH in the Green Capital year pleases me for several reasons: Each year around 100,000 guests use the services of the Weiße Flotte. The vessels of the Weiße Flotte are therefore a tourist attraction for our city which will now become even more attractive. This is because the future “MS innogy” is the first passenger ship in Germany to be powered by a state-of-the-art methanol fuel cell and the vessel is part of the pilot “green fuel” project. With this innovative project, Essen-based innogy SE is chartering new territory across Europe. Water, CO2 from the air and green power combine to form a climate-neutral energy source. These provide the ideal basis for a success story.“

The passenger ship MS innogy will be powered by an environmentally friendly methanol fuel cell. The energy source is methanol, a liquid alcohol with a very high energy density. This is generated directly on Lake Baldeney in the hydroelectric plant on the weir. Carbon dioxide is filtered from the surrounding air and converted into methanol with the aid of electricity and water in a two-by-two-meter-high installation. In turn, a fuel cell uses the methanol to produce electricity on the vessel and supplies a battery-backed electric motor. Most importantly, the entire process is carbon-neutral and therefore does not negatively impact the climate. While in operation, the engine of the vessel only releases the amount of carbon dioxide that is filtered from the air for the production of methanol.

Cleaner fuels, known as "green fuels", make a substantial contribution toward speeding up the transition of transport from fuels which are damaging to the environment, like petrol and diesel, to environmentally friendly alternatives such as “green” methanol or pure electric vehicles. innogy is systematically driving forward the development of a climate-friendly transport system. The Essen-based energy company is already one of the leading solution providers for electric mobility in Germany and Europe. Passenger cars can already be driven electrically without any difficulty. However, in many areas of logistics, such as in the case of ships, trucks and aircraft, it will take a relatively long time until they can also be operated on a purely electric basis. In this case, the "green fuel" solution presented by innogy could be an interim solution to reduce climate-damaging emissions in the transport sector quickly and efficiently.