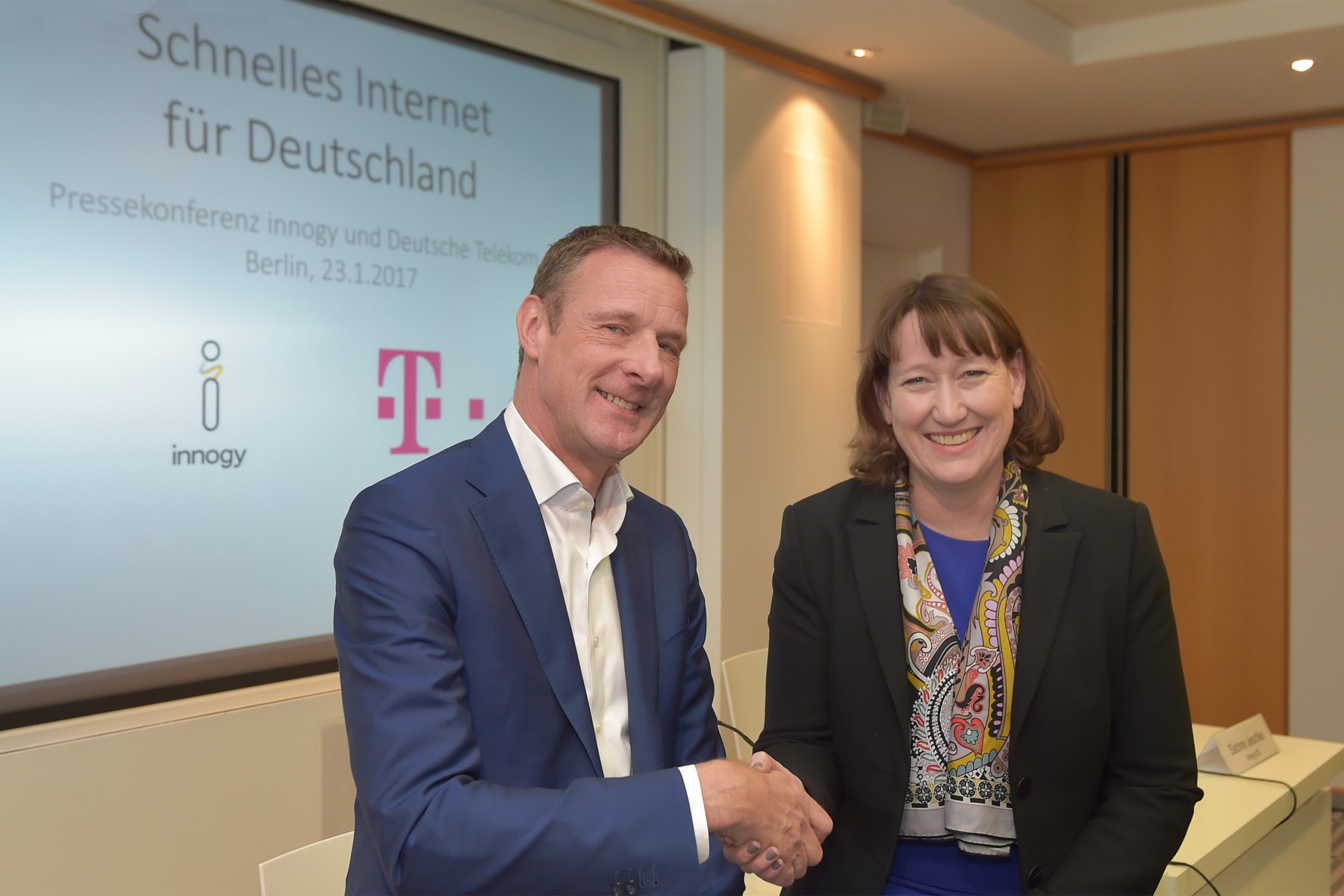 Germany needs a faster internet, and innogy and Deutsche Telekom have been tackling this task together. Broadband access to the worldwide web has come to be one of the decisive factors involved in a company’s choice of location. Without the appropriate internet infrastructure and high-speed data transmission, German companies are at a disadvantage compared to global competitors. Germany still lags far behind in terms of broadband rollout. The German federal government has set a target of broadband with bandwidths of at least 50 megabits per second to be available to all households by 2018. innogy and Deutsche Telekom have signed a cooperation agreement in order to stimulate the necessary expansion of the broadband network in time. The term of the agreement is to last at least ten years.

“We are really looking forward to long-term cooperation with Deutsche Telekom,” said Hildegard Müller, COO of Grid & Infrastructure at innogy, at a joint press conference held today in Berlin. “The expansion of the high-speed internet is a national priority. As innogy we will work together with Deutsche Telekom to be instrumental in helping Germany achieve this objective as quickly as possible,” she added.

“Deutsche Telekom wants to work with partners to drive broadband expansion in Germany”, explained Niek Jan van Damme, Member of the Board of Management Deutsche Telekom AG for Germany. “The agreement with innogy will cover 60 local networks in the Eifel, Hunsrück and Münsterland regions. The partnership is a win-win-win situation for our customers and both companies,” van Damme added at the conference in Berlin.

Both companies agree that the cooperation is going to make a significant contribution to the rapid expansion of the network. innogy and Deutsche Telekom estimate an overall market potential of up to one million people who will be able to benefit from broadband internet access over the next few years as a result of this collaboration. Regarding the necessary expansion of the networks, innogy is already well prepared, innogy Board member Müller explains. “With a network of 356,000 kilometres, we are the largest distribution grid operator in Germany and we are continuing to invest in infrastructure and modernisation of the grids. As the partner of local communities, we can bring high-speed internet to the rural regions of the country as well.” Thanks to innogy’s successful debut on the stock market in October 2016, the resources for investments have been secured. Overall, innogy plans to make investments amounting to around 6.5 billion euro in the 2016-2018 period, around two-thirds of which, i.e. a good4 billion euro, will be earmarked for the area of Grid & Infrastructure.

innogy and Deutsche Telekom have agreed to work together closely on network expansion and marketing. However, customers will still be free to choose their preferred provider – innogy will continue to make its own broadband networks available to other providers through open access technology. innogy will also continue to offer its own service with “innogy Highspeed”. For the provision of preliminary work, innogy is using the leading market place of the company vitroconnect for broadband connections.