Fiscal 2018 was an eventful year for innogy SE: in March, the planned takeover by E.ON/RWE was announced, the joint preparation of which is now in progress, within the boundaries set by anti-trust law. In its Renewables division, innogy successfully implemented its growth strategy and expanded its activities to include new markets and projects. However, positive developments were overshadowed by unusually low wind levels across large areas of Europe, which had a negative impact on the result. Earnings developed positively in the company’s grid business, due to one-off effects from the accounting measurement of items, among other things. In Retail, negotiations to merge the UK retail business of npower with the British retail activities of SSE plc were stopped at the end of the year with no result. For this reason, innogy had to again include its UK retail activities with their negative earnings contribution in the adjusted Group result. This made it necessary to adjust the outlook for 2018, even though performance at Group level had been in line overall with the expectations up until then.

innogy closed fiscal 2018 in line with the adjusted outlook issued in December 2018: adjusted EBIT reached EUR 2,630 million, and was thus down about 7 per cent year on year. Adjusted net income fell to EUR 1,026 million. On this basis, the Executive Board and Supervisory Board of innogy SE will propose to the Annual General Meeting on 30 April 2019 a dividend pay-out of EUR 1.40 per share. This means that the pay-out ratio will be in the middle of the targeted range of 70 to 80 per cent of adjusted net income. For details on business performance, please refer to the 2018 Annual Report, available at www.innogy.com/annual-report-2018.

Uwe Tigges, Chief Executive Officer of innogy SE: “2018 was a very turbulent year for innogy. The transaction announced by E.ON and RWE early in the year caught us by surprise, and for our employees it was anything but good news. We succeeded in concluding agreements with both E.ON and RWE on the integration of our business activities into both Groups that took account of the interests of our employees, investors, customers and other stakeholders. But, our key focus is of course on further developing our operational business: we are rigorously driving our strategy forward, and are bolstering our position in an increasingly competitive market environment. I am very confident in this regard, since our employees are doing an outstanding job despite the uncertainty and the added burden caused by the planned transaction of E.ON and RWE.”

Bernhard Günther, Chief Financial Officer of innogy SE: “Our grid business is and will remain our most important source of earnings. We were able to maintain our earnings level and invest in growth, for instance with our investments in the broadband business. For Renewables, it was not a good year for wind power, but we laid the foundations for further growth. We performed well in the area of auctions in particular, and we also successfully entered into the solar market in Australia. Through the sale of shares in the Triton Knoll offshore wind farm to two Japanese companies we found partners who we can work with to bring this attractive major project to completion. We unfortunately did not achieve our goal of combining our UK retail business with that of SSE, and that will have a negative impact on our result in 2019 as well. All in all, we face challenges in our European electricity and gas retail business. But by establishing new collaborative arrangements and expanding our online business, we were able to secure our competitive position.”

innogy is pressing forward with its focused growth and investment strategy in its three divisions and its additional growth areas. In its Renewables division, innogy operates generation facilities with a total installed capacity of about 3.6 gigawatts (GW). There are also renewables-based plants allocated to the other two divisions with a generation capacity of 0.4 GW. innogy thus operates renewable energy plants with a total capacity of 4.0 GW. In fiscal 2018, the company expanded its portfolio of wind and solar power plants by a total capacity of about 200 megawatts (MW), pro-rata view in line with innogy’s total share. For the Triton Knoll project (860 MW, innogy stake 59%), innogy secured project financing in 2018 and, in line with its corporate strategy of implementing major renewables projects in collaboration with partners, sold 41 per cent of the wind farm to two Japanese energy utilities. Major projects such as the Limondale solar farm in Australia (349 MW, innogy stake 100%) and the Scioto Ridge onshore wind farm in the US (242 MW, innogy stake 100%) were also launched. To expand its generation capacities further, innogy built up a development pipeline of wind and solar projects with a current total capacity of about 7.1 GW. The company also performed well at auction: innogy was awarded a feed-in tariff in accordance with the German Renewable Energy Act and grid connection for the German offshore wind project Kaskasi (325 MW, innogy stake 100%), among others.

With a grid length of 574,000 kilometres, innogy is one of the major distribution system operators in Europe. It operates the most powerful electricity grid in Germany, with a length of 350,000 kilometres.Of the approximately 1.7 million renewables plants in Germany, about 20 per cent are connected to innogy’s electricity grid. The DESIGNETZ project, led by innogy, is developing an overall concept for integrating renewable energy into the supply system. The project was designed to run for four years and marked its half-way point at the beginning of 2019. innogy is also pressing ahead with the expansion of the fibre-optic broadband network, with a focus on rural areas in Germany and various regions in the Czech Republic. In fiscal 2018, innogy also proved successful in the concessions business, ensuring the supply of around 730,000 residents by securing concession contracts. In total, innogy reliably supplies more than 14 million inhabitants throughout Germany with electricity and gas via its distribution systems.

With about 22 million electricity and gas customers, innogy is one of Europe’s leading retail energy companies, and leads the field in Germany with 7.9 million customers. Despite a tough competitive environment, innogy was able to stabilise its customer base in fiscal 2018, apart from in the United Kingdom. After suffering customer losses in Germany at the start of the year, it succeeded in gaining around 50,000 customers in the second half.

The business area of eMobility showed strong international growth during the last fiscal year. innogy expanded its presence in the US with the acquisition of BTC Power, the leading supplier of DC charging technology, and Recargo, a leading software company for e-mobility in the US and the provider of the Plugshare app. innogy is already one of the leading technology providers for charging infrastructure, and has installed about 25,500 charging points for customers around the world: more than 23,500 in Europe, and 1,900 in the US, for which innogy has assumed responsibility for technical support. In partnership with 170 municipal utilities, innogy now operates one of the largest interconnected charging networks in Germany. At the beginning of 2019, innogy bundled its eMobility activities into a separate company, innogy eMobility Solutions GmbH, in recognition of the increasing importance of this area.

For fiscal 2019, innogy projects adjusted EBIT of about EUR 2.3 billion, down significantly on theprevious year. The main reasons for this decline are the sale of its Czech gas grid business to RWE in February 2019 – meaning it will no longer contribute to innogy’s earnings for the balance of the year – and the introduction of a price cap for standard variable tariffs and higher regulatory costs in the UK retail business. Outside the UK as well, innogy expects lower earnings in its retail business due to the still intense competition and the rise in wholesale prices for electricity and gas. For the Renewables division, on the other hand, innogy expects a noticeable increase in earnings, one reason being the continued expansion of generation capacities from renewables. This outlook is based on an assumption of “normalised” weather conditions. For the Grid & Infrastructure division, innogy is expecting a steep decline in earnings compared to the previous year as a result of the sale of its Czech gas grid business.A mild improvement in the adjusted financial result is anticipated thanks to more favourable financing conditions.

Similar to the development in adjusted EBIT, the outlook for adjusted net income, at about EUR 850 million, is also significantly lower compared to the previous year. For its dividend, innogy continues to target a pay-out ratio of 70 to 80 per cent of adjusted net income.

Capital expenditure up year on year

innogy’s capital expenditure amounted to EUR 2,688 million in fiscal 2018, EUR 550 million more than in the previous year. The expansion and modernisation of its grid infrastructure continue to be the focus of the company’s investment activity. Besides maintenance of existing assets, the focus was on the connection of decentralised generation assets and grid expansion related to the energy transition. Additional capital was invested in the expansion of the company’s broadband activities. The increase in capital expenditure in the Renewables division is mainly a result of construction of the Triton Knoll offshore wind farm in the UK and onshore wind projects in the UK and the US. Investment was also up in the Retail division. For eMobility, the substantial increase in capital expenditure compared to the previous year resulted from the acquisitions of BTC Power and Recargo in the US and higher development expenditure.

As at 31 December 2018, innogy’s net debt was EUR 17 billion and was thus EUR 1.3 billion higher compared to the reporting date for 2017. During the reporting period, net financial debt increased by around EUR 0.8 billion to EUR 13.1 billion, as capital expenditure and dividend pay-outs in particular were higher than the cash flow from operating activities. Provisions for pensions increased from roughly EUR 3.0 billion to about EUR 3.5 billion (including the capitalised surplus of plan assets). A negative trend in plan assets and a decline in the discount rate in Germany from 2.0 to 1.8 per cent played a role in this regard, while the increase in the discount rate in the United Kingdom from 2.4 to 2.8 per cent had an opposite effect.

Rise in number of employees

As at 31 December 2018, innogy employed 42,904 people. Part-time positions were considered in these figures on a pro-rata basis. Last year, net number of employees grew by 511 employees. The increase was essentially attributable to the expansion of solar and wind projects, especially in the US; the expansion of eMobility activities in growth regions like the US; and the full consolidation of a new grid cooperation arrangement. Among the factors exercising a contrary effect were restructuring activities in the company’s retail business. 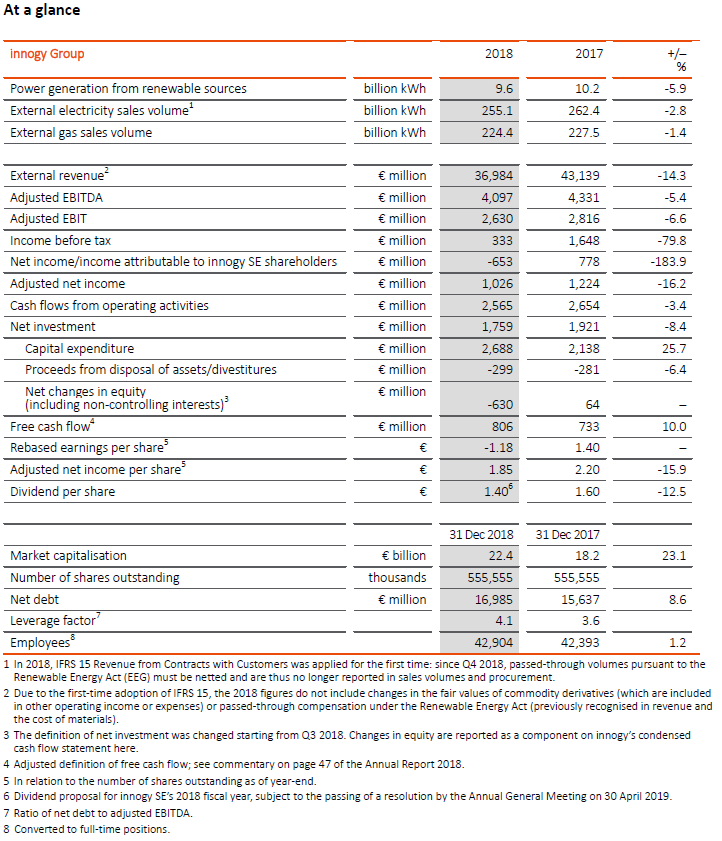