innogy’s business performance is on track: the Essen-based company confirms its outlook for 2019. It continues to expect adjusted EBIT of about EUR 2.3 billion and adjusted net income of about EUR 850 million for the current fiscal year. In the first quarter of 2019, adjusted EBIT reached EUR 964 million, substantially down year on year as expected. Adjusted net income fell to EUR 407 million. This was primarily due to developments in the UK retail business and the sale of the Czech gas grid business. For details on business performance, please refer to the 2019 Q1 Statement, available at www.innogy.com/q1-2019-statement.

Bernhard Günther, Chief Financial Officer of innogy SE: “Despite the unusual situation in which we find ourselves with the planned transaction between E.ON and RWE, we are continuing to focus on our operational business. This is reflected in our figures: since the beginning of the year we have seen an increase in customer numbers in our German retail business, even though the market environment remains difficult. The rise in customer numbers is not yet shown in the result. But we have created a good basis for the further development of the fiscal year. Factors contributing to the improved result for Renewables include a higher market price level and new capacities which were commissioned in 2018. The weather conditions are also somewhat better than in the previous year. The sale of the Czech gas grid business had a negative impact on the result for the Grid & Infrastructure division, as expected. Overall, business development in the first quarter was in line with our expectations. We confirm our outlook for 2019.”

In the first quarter of 2019, innogy posted a positive trend in its customer base, in its core market of Germany in particular: here, in a highly competitive environment, the company succeeded in acquiring about 130,000 new customers during the first three months of the current fiscal year. Customer numbers for Eastern Europe, the Netherlands and Belgium remained stable. In the company’s UK retail business, however, the persistently poor market environment resulted in a decline in customer numbers.

In the Renewables division, innogy is increasingly developing solar projects without relying on state subsidies: in Spain and Canada, the company is currently realising three solar projects with a total capacity of more than 100 megawatts, and innogy has just announced the final investment decision for its first two solar projects in the US. All projects are expected to be commissioned in 2019. Furthermore, innogy officially opened its first wind farm in Ireland in April.

innogy invested EUR 328 million in the first three months of 2019, EUR 43 million less than in the same period in the previous year. Investment was up in the Renewables division. The growth primarily stems from capital spent on the Triton Knoll offshore wind farm in the UK, onshore wind farms in the US and UK and the Limondale solar farm in Australia. A decline in capital expenditure in the German Grid & Infrastructure segment was due to a reduction in construction activity in the first quarter. The sale of innogy’s Czech gas grid business led to a higher proceeds from disposal of assets/divestitures.

For fiscal 2019 as a whole, innogy expects net investment to be considerably higher than in the previous year. This does not include the proceeds from the sale of its Czech gas grid business.

Net debt of around EUR 18.9 billion

As at 31 March 2019, innogy’s net debt was about EUR 18.9 billion, a rise of some EUR 1.9 billion compared to 31 December 2018. The main reason for this was the recognition of additional lease liabilities following adoption of the accounting regulation IFRS 16, which led to an increase in net financial debt.

As at 31 March 2019, innogy employed 40,882 people. Part-time positions were considered in these figures on a pro-rata basis. This represents a decrease of 2,022 in employee numbers compared to 31 December 2018. This decline stems mainly from the sale of the Czech gas grid business.

innogy confirms its outlook for 2019 at both Group and divisional levels. It expects adjusted EBIT of about EUR 2.3 billion for the current fiscal year, which represents a substantial decline year on year. The main reasons for this decline are the sale of the Czech gas grid business in February 2019, which will thus no longer contribute to the result for the balance of the year, the introduction of the Standard Variable Tariff (SVT) price cap, and higher regulatory costs in the UK retail business. Like the change in adjusted EBIT, the outlook for adjusted net income is also well below the figure for the previous year, at about EUR 850 million.

For its dividend payment, innogy aims to continue paying out 70 to 80 per cent of its adjusted net income. 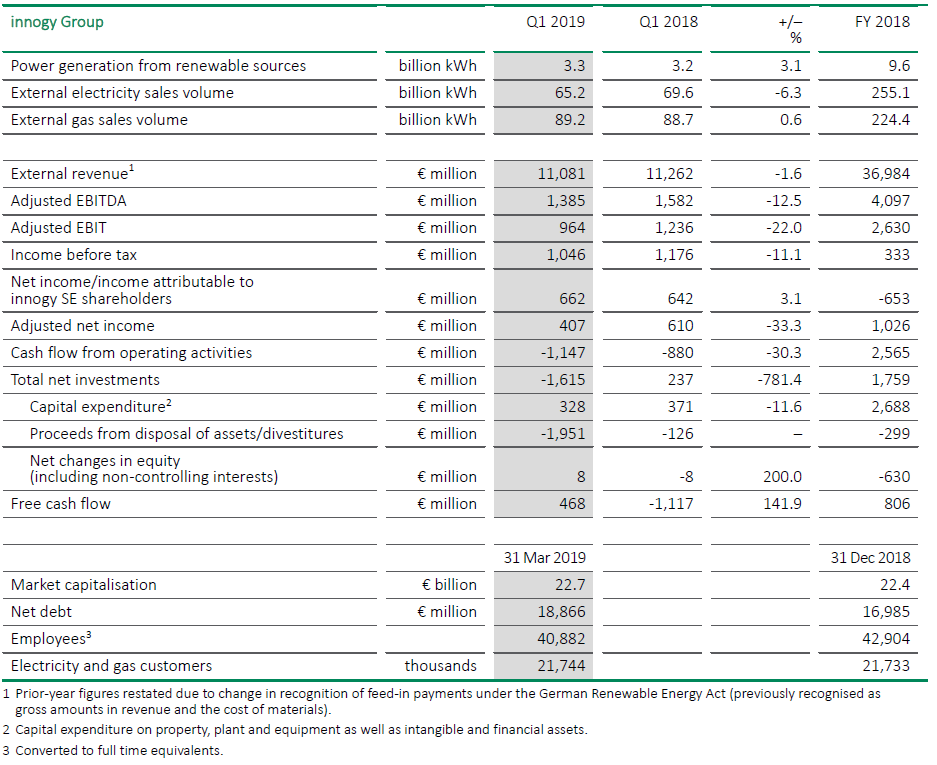