innogy SE confirms its outlook for 2018 for adjusted EBIT and adjusted net income at Group level. At divisional level, however, an adjustment to the outlook was necessary. Adjusted EBIT for the first nine months of 2018 amounted to EUR 1,872 million, down 11 per cent compared to the same period the previous year: extraordinary low wind levels in the UK and Germany in particular impacted the result in the Renewables division. Positive price effects and earnings contributions from new assets could only partially compensate for these effects. A further reason for the decline in adjusted EBIT at Group level was lower earnings in the Grid & Infrastructure division due to the new regulatory requirements for gas in Germany. In addition, the result for Retail was affected by the non-recurrence of positive one-off effects in Germany in 2017, as well as unexpected commodity cost increases driven by cold weather in the Netherlands in the first quarter. Adjusted net income decreased from EUR 978 million to EUR 721 million. This was caused by lower adjusted EBIT and a weaker financial result compared to the previous year’s period in connection with the reporting of retail activities in the United Kingdom as “discontinued operations”. For details on business performance in the individual divisions, please refer to the 9M 2018 statement, available at www.innogy.com/9M2018-statement.

Bernhard Günther, Chief Financial Officer of innogy SE: “Steadily mounting competition continues to pose considerable challenges to our retail business. For this reason and also due to the cold weather effect in the Netherlands in the first quarter, we have had to make a downward adjustment in our outlook for Retail. For the Renewables division, we also expect a lower result due to adverse weather conditions. Particularly low wind levels, especially in the second and third quarters of 2018 in the UK and Germany, led to reduced utilisation of existing plants. We do, in contrast, expect the result for the Grid & Infrastructure division to be higher, mainly due to higher one-off effects and higher income from participations. Overall, we confirm our outlook for 2018 at Group level.”

At 350,000 kilometres, innogy operates the longest and most powerful electricity grid in Germany, and is one of the major distribution system operators in Europe, with a grid length of 574,000 kilometres. With 7.8 million customers, innogy leads the field in Germany, and it is also one of the leading retail companies in Europe with about 18 million customers (this figure does not include npower customers).

In renewables, innogy is in fifth position globally in the area of offshore wind. Here, innogy has achieved a further important milestone: it has secured the necessary financing for the Triton Knoll offshore wind project and begun construction of the onshore electrical system. In line with its corporate strategy of cooperating with partners when implementing major projects in the area of renewables, innogy sold 41 per cent of the wind farm to two Japanese energy utilities in advance.

On 8 November 2018, innogy and SSE plc decided to enter into negotiations on adjusting the terms of the planned transaction to combine innogy’s British retail business with SSE’s household energy and energy services business in Great Britain as agreed in November 2017. For details, please refer to the press release available at news.innogy.com/proposed-transaction-in-great-britain-require-adjustments.

innogy’s capital expenditure in the first nine months of 2018 rose by about 40 per cent compared to the previous year’s period, to around EUR 1,575 million. Increased investment was recorded in the Renewables division in particular, partially driven by investments for offshore wind farm Triton Knoll and the Limondale solar power plant in Australia. A rise in investments in Grid & Infrastructure was due mainly to higher investments for the expansion and modernisation of grid infrastructure and increased broadband activities. Investment was up slightly in the Retail division too. The significant increase in investments in the business area of eMobility is due to the acquisition of BTCPower in the USA.

Net debt at around EUR 16.3 billion

As at 30 September 2018, innogy’s net debt totalled around EUR 16.3 billion, a slight increase of about EUR 0.6 billion compared to 31 December 2017. This can be attributed among other things to a budget deficit that results from deducting the dividend payments from the free cash flow.

Rise in number of employees

As at 30 September 2018, innogy employed 36,841 people (converted to full-time positions and not including npower employees). This represents an increase of 830 employees compared to 31 December 2017. Among other things, the rise can be attributed to the acquisitions in the Renewables division and the business field of eMobility, as well as the full consolidation of a new grid partnership company.

The basis for the dividend payout is adjusted net income, 70 to 80 per cent of which innogy intends to continue paying out. innogy still expects a leverage factor of around 4.0 for the current year. 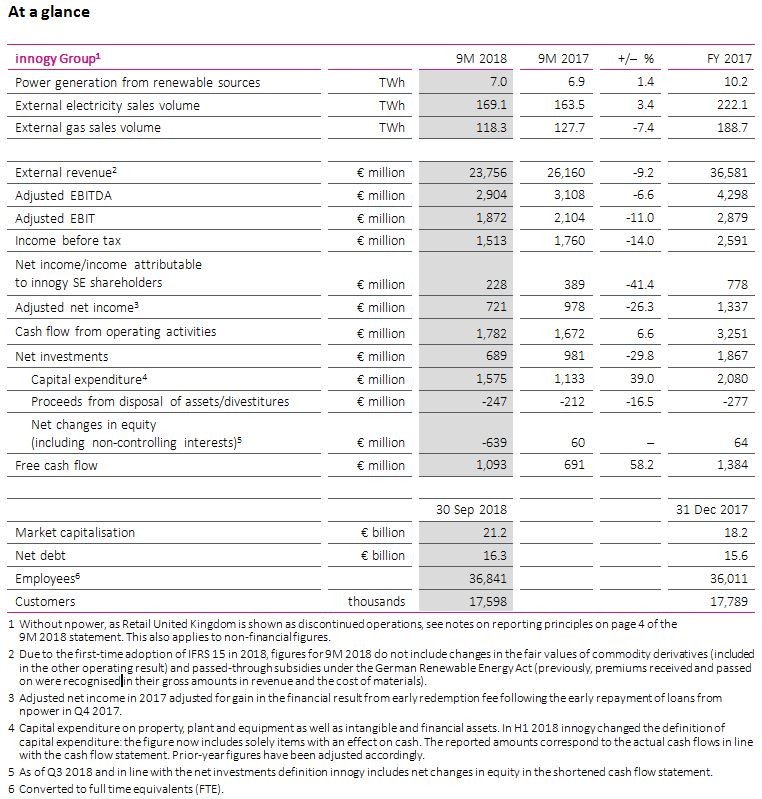