In the first nine months of fiscal 2019, innogy SE’s earnings declined year on year as expected, with adjusted EBIT of €1,060 million and adjusted net income of €212 million.

innogy’s takeover by E.ON results in significant structural effects in the reporting: activities to be sold off in relation to the E.ON/RWE transaction have been assigned to the new segment Divestment Business and are stated as discontinued operations going forward. Consequently, these activities no longer contribute to adjusted EBIT and adjusted net income; the prior-year figures were adjusted accordingly. The 2019 outlook has been technically adjusted for the same reason: for the current fiscal year, innogy now forecasts adjusted EBIT of about €1,600 million and adjusted net income of about €400 million.

Takeover of innogy by E.ON

Following approval of the transaction by the European Commission, the shares in innogy held by RWE amounting to roughly 76.8 per cent were transferred to E.ON on 18 September. As a result, E.ON is innogy’s new majority shareholder. Furthermore, innogy’s minority shareholders which had accepted E.ON’s voluntary public takeover offer and held approximately 9.4 per cent of the shares received the offer consideration for their shares by the end of September 2019.

On 21 August, innogy sold its 49 per cent stake in the business of Slovakian VSEH (Východoslovenská energetika Holding a.s.) to RWE. VSEH is a holding company, whose subsidiaries are engaged in the business of electricity supply and distribution as well as retail in Slovakia. The company’s earnings in 2019 up to the time of deconsolidation are stated under income from discontinued operations. As a result of this reporting, the expected earnings of some higher, double-digit million euros from the Slovakian energy company in 2019 no longer contribute to the Group’s adjusted EBIT for the current fiscal year.

Business performance from January to September 2019

Following the takeover of innogy by E.ON, innogy’s activities in renewables, the gas storage business and the stake in the Austrian utility Kelag are to be transferred to RWE in a further step. Furthermore, in order to fulfil a commitment made by E.ON to the EU Commission as a prerequisite for anti-trust approval, innogy will sell its remaining Czech activities (mainly retail business). The previously stated activities form the segment Divestment Business which was newly created in the third quarter 2019; they are initially reported in the 9M statement as discontinued operations in accordance with IFRS 5.

All income and expenses for the reporting year and the previous year in relation to these activities are recognised separately in the income statement, condensed into one line as ‘Income from discontinued operations’. Among other things, as a result of this reporting these activities no longer contribute to the consolidated figures for external revenue, adjusted EBITDA, adjusted EBIT, non-operating result, financial result and taxes on income, and are also no longer included in adjusted net income. The figures for capital expenditure and employees also only include continuing operations. The prior-year figures were adjusted accordingly. In the balance sheet, the assets and liabilities of the discontinued operations are also presented separately, but in accordance with IFRS 5 the balance sheet for the prior-year period has not been adjusted.

At the level of the individual divisions, earnings developed as follows:

The adjusted EBIT of the Grid & Infrastructure division amounted to €1,160 million, down year on year (€1,318 million). In the Eastern Europe segment in particular, income declined due to the lack of earnings from the Czech gas business, which was sold in early February 2019. In the segment Germany, lower extraordinary items and higher staff costs contributed to the lower earnings.

In the Retail division, adjusted EBIT fell from €348 million in 9M 2018 to €161 million in the reporting period for 2019. The decline was mainly driven by regulatory interventions in relation to introducing the price cap for standard tariffs in Great Britain. Other negative factors were higher grid fees and wholesale prices for electricity and gas in Germany, which could not be passed on or not yet passed on in full to the customers.

While adjusted EBIT in the Netherlands/Belgium was on par with last year, it was lower than in the previous year in Eastern Europe. In particular, regulatory intervention resulted in higher procurement costs from wholesale price increases being borne by energy utilities.

It is positive, that innogy has been able to expand its customer base in two regions since the start of the year, despite intense competition. In Germany, by the end of September 2019 the company added almost 230,000 new customers, and in Netherlands/Belgium, it noticed a gain of around 35,000 customers.

Income from discontinued operations totalled €307 million (previous year: €276 million). The increase was primarily driven by the deconsolidation gain from the sale of the Slovakian company VSEH and from the operating performance of the segment Divestment Business which was formed in the third quarter 2019 and which is also reported as a discontinued operation. An opposite effect was felt from impairments recognised for the Nordsee Ost offshore wind farm, which was revalued due to the bankruptcy of a service provider, including a revision of the maintenance strategy and the impact of the so-called ‘acceleration model’ on the valuation.

Positive non-operating result. The non-operating result, which contains certain non-operating and aperiodic effects, improved from –€441 million in the same prior-year period to €217 million in 9M 2019. Among other things, this improvement was driven by deconsolidation gains from the sale of the Czech gas grid business, while negative valuation effects of commodity derivatives compared to the same period last year and expenses in relation to the RWE/E.ON transaction had an opposite effect. Additionally, the non-operating result for 9M 2018 was influenced by goodwill impairments on innogy’s United Kingdom retail activities (–€748 million).

Financial result lower than in previous year. A decline was registered for net interest (from –€269 million in 9M 2018 to –€301 million in the same period of 2019). This development was due to initial recognition of interest expenses from lease liabilities in connection to the first-time application of IFRS 16 and weaker positive effects from the reversal of differences in carrying amounts from the debt transfer from RWE. Lower average borrowing rates and positive effects from the removal of the interest-bearing debt of our Czech gas grid business which was sold off at the end of February 2019 had a positive impact on net interest. Interest accretion to non-current provisions was higher as a result of lower interest rates (–€44 million in 9M 2018 versus –€73 million in the 2019 reporting period). The other financial result improved from –€64 million to –€26 million, mainly due to positive income on securities in 9M 2019 versus a loss in the same period of 2018.

Additionally, in the third quarter of 2019 innogy paid back early a loan of €700 million which was originally due on 20 October 2020.

As of 30 September 2019, the effective tax rate was 51 per cent. One of the main reasons for this is that innogy wrote off deferred taxes in the United Kingdom and the Netherlands, as it was not anticipated that these could be used. As a result of the presumed transfer of the Renewables business, the option of applying the related earnings contributions to determine the recoverability of deferred tax assets was no longer available.

Capital expenditures almost on par with previous year. During the reporting period, capital expenditures were almost the same as in the prior-year period (€1,055 million in 9M 2018 versus €1,034 million in 9M 2019). Furthermore, innogy recorded significantly higher proceeds from disposals/divestments in the Grid & Infrastructure division. This stemmed primarily from the sale of the Czech gas grid business.

Cash flows from operating activities of continuing operations fell from €1,055 million in 9M 2018to –€163 million in the 2019 reporting period. Effects related to working capital were partly responsible for this development, as this item usually fluctuates sharply during the year. Compared to the previous year, the impacts of a number of different items were felt, including an effect from commodity procurement for the retail business related to the reporting date, which influenced working capital positively in 2018 and thus had a corresponding opposite effect during the reporting period for 2019. The free cash flow of €802 million was considerably higher than the prior-year figure (€217 million), due to the sale of the Czech gas grid business. After deducting dividends from free cash flow, the budget deficit amounts to –€127 million, up by €822 million versus the same period of 2018.

The net debt of continuing operations rose to €18,009 million during the reporting period, comparedto €16,985 million at the end of 2018. This was due to the budget deficit and first-time applicationof IFRS 16, as the reporting of lease liabilities had a negative impact on net debt. The decline in the discount rates since the beginning of the year from 1.8 per cent to 1.0 per cent in Germany andfrom 2.8 per cent to 1.8 per cent in the United Kingdom resulted in an increase in provisions for pensions to €4,504 million. The positive performance of plan assets had an opposite effect. On balance, the net debt of discontinued operations amounted to €1,111 million at the end of the reporting period.

Structural effects during the first nine months of 2019 had an impact on the outlook for the whole year. Various activities which will be transferred to RWE following the takeover of innogy by E.ON (activities in renewables, the gas storage business and the stake in the Austrian utility Kelag) as well as the remaining business in the Czech Republic are reported as ‘Income from discontinued operations’ in the new segment Divestment Business. As a result of these structural effects, the above activities are no longer included in the consolidated figures for adjusted EBIT and adjusted net income. Adjusted for these effects, innogy now forecasts adjusted EBIT of about €1,600 million (previously about €2,200 million) and adjusted net income of about €400 million (previously about €800 million) for the current fiscal year. 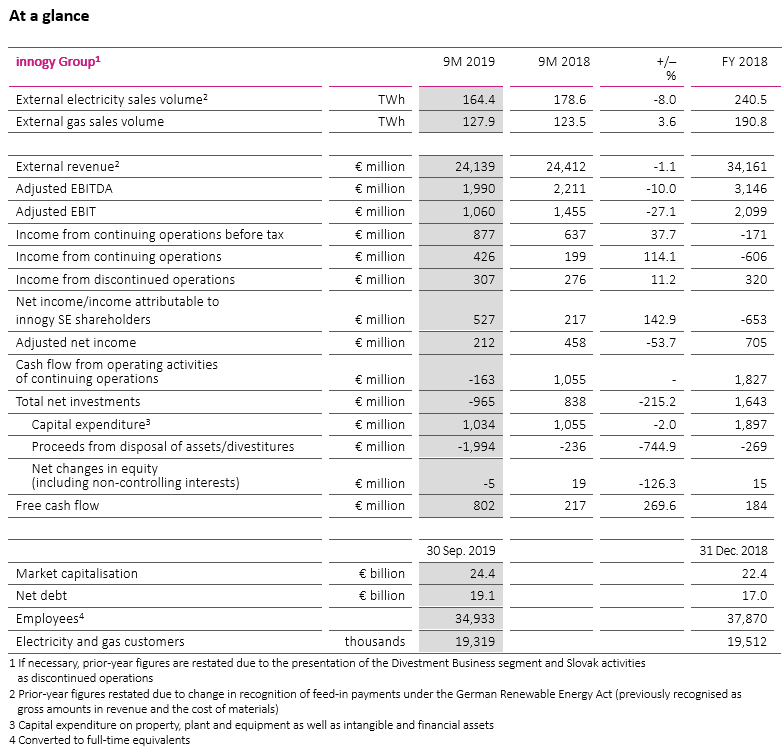